Japan hides under it’s kawaii cloak some of the most fantastic and bizarre creatures to ever ascend from the pits of human imagination. In Japanese, they called “Yōkai”, and these are some of my favorites. 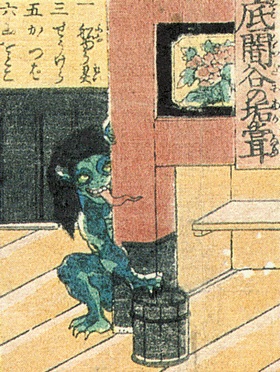 Bathing is an integral part of Japanese culture. Public bath-houses or “Onsens” are a indispensable component of any self respecting Japanese village, dating back for well over a thousand years, with the earliest on record being the Dogo Onsen in 712 AD, on the island of Shikoku.

Steam mysteriously floating through the air, coupled with a rigid expectation of silence. Social pressure, and the cryptic echo of drips allow the imagination to run wild, inspiring the condensation our most paranoid thoughts, the darkest of which are no better personified than the creature which haunts the glistening walls of Japanese bathhouses: The Akaname.

First depicted in classical yōkai illustrations as monstrously deformed children with hideously long tongues, these creatures were first drawn with no explanation given, leaving their true nature open to interpretation. Later entered into the Edo-period book, Kokon Hyakumonogatari Hyōban, and they are first given the name “Akaneburi”, with the word “neburi” meaning “to lick”.

According to this, and later entries regarding them, Akaname reside in the sunken corners of dilapidated old bathhouses, surviving by slurping up the filth left behind by dirty bathers and lazy onsen staff. The moral hiding at the centre of this ghoulish tale is simple: Keep your bathhouse clean! 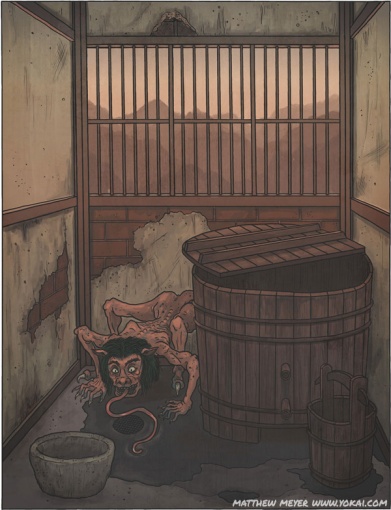 Modern imagining of the Akaname by Matthew Meyer

Historically speaking, during the time these tales were written it was suspected that all living things survived by consuming the substance which spawned them. Lice eat dirt, and at the time they were believed to have come from dirt, so too was the Akaname thought come into existence: Manifested as congealed grime, born from and feasting upon its environment, all the while horrifiying those unfortunate enough to stumble upon it.

When it comes to mythological creatures from Japan, few are as quintessential and well recognized as The Kappa. Translated literally as “River Child”, they are said to dwell in the waters close-by to human settlements, and were often used to explain drowning victims who would be found dead with no outward signs of trauma.

Some believe the story of the Kappa is based on the Japanese giant salamander. Still others maintain it’s legend formed around sightings of the now extinct Japanese river otter, which was known to stand upright, and could have easily confused a panicked person into thinking they’d seen a monster. It could have been a combination of the two, mixing separate reports from different areas to create one creature, but as such its true origins are unknown, and will likely remain so.

Regardless of their true source, the Kappa legend did serve one undeniable function: as a fable to teach young children of the dangers from playing in rivers. I’m sure it was an effective deterrent, because there is one behavior particular to the Kappa I have neglected to mention till now, and it is one that would be sure to frighten even the savviest of boatmen, let alone small children …

At the time, it was believed that (and please bear with me here) the human soul was located inside a small ball called a shirikodama. This precious little item was purportedly held deep inside the human body, specifically … inside the anus.

This rare delicacy was reported to be the Kappas favorite snack, and they would do anything to get it, tearing them out of anyone unfortunate enough to swim near their dens. This part of the legend would also be used to explain loose bowels sometimes found in drowning victims. It is possible that this aspect of the tale presented another point of moral guidance for its intended audience: Don’t shit in the river nearby to town.

Modern times have seen unexpected transformation of the Kappa from hated river rapist to lovable pop-culture icon. You can now see them plastered on businesses and products of all varieties. There is even a whole street in Tokyo named after them, Kappabashi-dori, where store-fronts have taken them on as their official mascots, emblazoning the Kappa’s image on everything from coffee mugs to pork buns.

For these reasons one could argue that the Kappa has become the most successful Yōkai of all time, still recognized and remembered by Japanese people today. But it has done so at great expense, foregoing its dignity as a horrifying monster, and transforming from kowai (scary) to kawaii (cute), in just a few short generations. Hallowed beasts of old, tremble in fear before your new master: Culturally exploitative marketing managers.

As you may have already gathered, moral guidance and social control play a central role in the function of Yōkai stories. That being said, we now come to a creature which epitomizes that function. They have been used to horrify and discipline children in the Oga Peninsula in Northern Honshu for countless generations, and they are called the Namahage.

Unlike the Kappa, these monsters have a specific root legend, well known in the Oga region from which they come. The story goes that when Chinese Emperor Wu of Han (born 141 BC) came to Japan, he brought along with him five demonic ogres (or “Oni”). After the visit, these ogres decided to stay, establishing homes in the two nearby mountains of Honzan and Shinzan. Specific details regarding this story vary from that point on.

What I can tell you however, is that every year during koshōgatsu (the first full moon of the New Year), young men in grass leggings, wearing horrifying masks and brandishing torches, descend upon local villages, and (much to the surprisingly relaxed amusement of their parents) scream at and terrify little children. What these kids don’t know is that these actors are often working in accordance with local parents. Sometimes they will even request that the actors impart specific lessons on their children during these highly ritualized nighttime “raids”, everything from better grades in school to brushing their teeth more.

Despite their hideous appearance and ferocious behavior, some older Shinto legends suggest that the Namahage are actually benevolent spirits, acting in the employ of the sacred mountain God’s (The “Kami”). They are sent to punish those who are lazy or wicked, bringing dishonor to the region. The Namahage derive their name from “Namomi”, which is the regional term for heat blisters, which would most typically afflict those who have lazily spent the winter huddled around the fire. “Namomi ko hagetaka yo?” – meaning “Have your blisters peeled yet?!” would be one of the most iconic phrases used by the Namahage to ridicule layabouts.

It’s the Eastern Ying to the Yang of Western Santa Claus. “Do exactly as your parents say, otherwise ogres will come and eat you.” Simple enough. In a society where strict familial hierarchy is paramount, and people are zealously bound to colour within the lines of socially acceptable behavior, such traditions are not all that surprising, but nonetheless shocking to see in action.

Below is a video (not my own) of what goes on during a Namahage festival.