Looking back on it now, I think of all the places in Japan I visited, Kyoto suited me best. Absent from the bleating crowds and sheer expanse of Tokyo, Kyoto is still large enough to keep your pulse beating while getting lost in a crowd. Flat and compact, the entire city is traversable by bicycle, yet this cities many distractions will always cause your trip to take longer than expected.

Picking up where I left off, we had just entered the first temple on our walking tour, Kiyomizu-dera. Dropping ¥300 into the expectant hand of a smiling attendant, I was beckoned down a set of stairs. They were worn from foot traffic, but immaculately clean, no doubt because everyone had been asked to their shoes off. I slipped on some ill-fitting sandals and headed down the stairs, a pitch black passage waited at the bottom.

This instantly made me nervous. I had bashed my head enough times in Japan to realize that the entire country (especially the older buildings) was generally oriented to those of a more reasonable height. Regardless, I pressed on, the muted echoes of those ahead of me guiding the way.

Grazing my hand along the left wall to keep a forward path, I suddenly stumbled into the backs of a few people ahead of me. They graciously remained silent, attempting to preserve the ambiance that everyone was expecting. I muttered a brief apology and slowed my pace. Leaning against the wall , I waited for my eyes to adjust to the darkness, but it was no use. It was too dense, and after a few moments I carried on.

Feeling my way around a short sharp turn, a white glow suddenly appeared in the distance. I slowed my pace even further, wanting to ration out the steady rise of light as it grew larger in my eyes. I suddenly felt like a creature of the deep, dark ocean.

As I drew closer, I could see that beneath the light lay a large white stone. It was pot-marked and glowing, reflecting light like the moon. My eyes watered from its brightness, as if somehow my five minutes spent in darkness had been six weeks.

My ears were ringing from the silence. The absence of sight had diminished all sense of time and distance, and each step became either millimeters or light years of distance traveled. My limbs were ghosts in the dark. It now felt like I had been called from the depths of a ocean to witness the birth of a star.

Without thinking, I reached over and placed my palm in the centre of the stone, feeling its roughness against my skin. I closed my eyes, wanting to focus on the sensation of touch, trying to read its ridges like a hieroglyphic form of braille. It felt like I was lacking the software. I found myself thinking about those around me, invisible in the darkness. I had completely forgotten that anyone else was there.

I thought about how lucky I was to be there, being able to visit this place. Japan is a country my ancestors could only have ever dreamed of, if they had even heard of it at all. I thought about my Great-Grandfather, mining coal in caves far beneath the earth. I wonder if he ever learned to see through the dark.

Kia’s mustached face suddenly emerged into the light above the stone, instantly breaking the spell.

“It’sa you.” I muttered to myself.

Kia frowned and walked away. 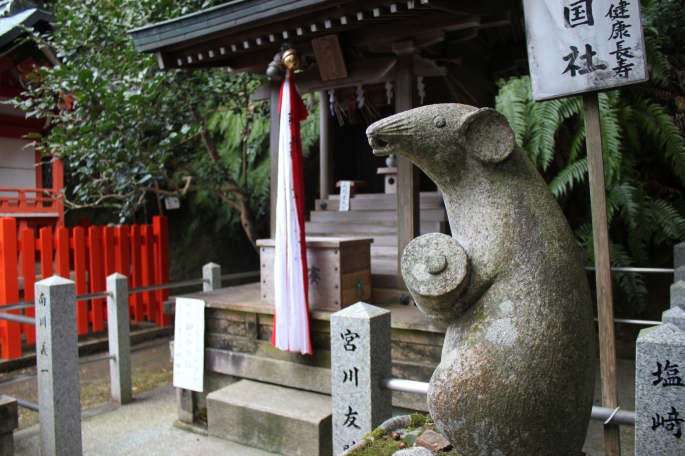 Following the temple was the typical mishmash of enticing street vendors. Matcha tea chocolate balls and deep fried cheese sticks… I didn’t know where to start (or stop). Kia found a bike, and stopped to stare at it for a few minutes, while Spencer (our house History Major) regaled me with local tales from Japanese history. Apparently, a local monk had once accidentally burnt down a temple with a prayer candle. Given how all the temples are made of wood, and filled with open flames, this hardly seemed surprising, and I hope the monk didn’t beat himself too much up over it. Sometimes it seems like we’re set up for failure. 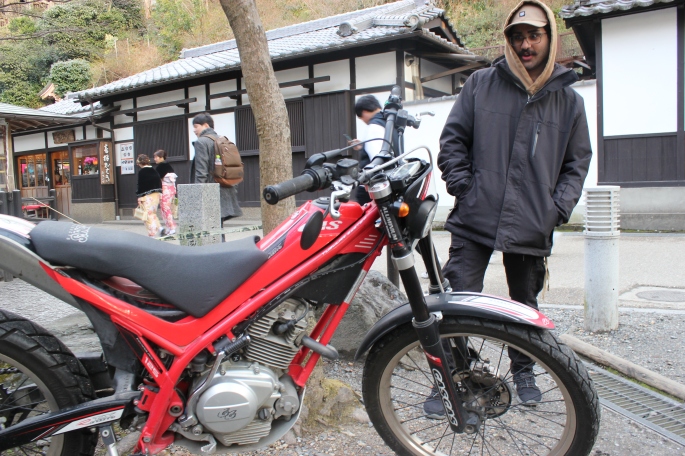 Intently following our little map, we journey’d a little further down to find the entrance to a small alleyway, one which the Lonely Planet described as the “single most attractive street in Kyoto.”

At first, we were flatly underwhelmed.

It was only after the first few bends, escaping the noise and crowds of people along the regular walking path that I began to understand what the book was referring to. It was residential, adorned with high stone walls, with ivy running across them. Planters for flowers sat above them, but it being the dead of winter, only the green vines stood out against the flat grey walls.

I allowed my imagination to bloom into what the summers must look like here. I pictured the reality of a childhood spent running between these gates, among the tea-houses and the tourists. I thought about how different my life would be if I grew up here.

As we lazily made our way back out the alley, I turned and realized that the sun had begun to dip behind the mountains. The air was getting colder. Merchants began sweeping the entrances of their stalls as monks gently ushered slow-walking visitors out of the temple grounds. Our time in Higashiyama was reaching its end.

We walked to the furthest end of the trail to discover that it ended as it began, with a massive cemetery. Climbing up the stairs to its highest point, we turned and sat in silence, watching the sunset. 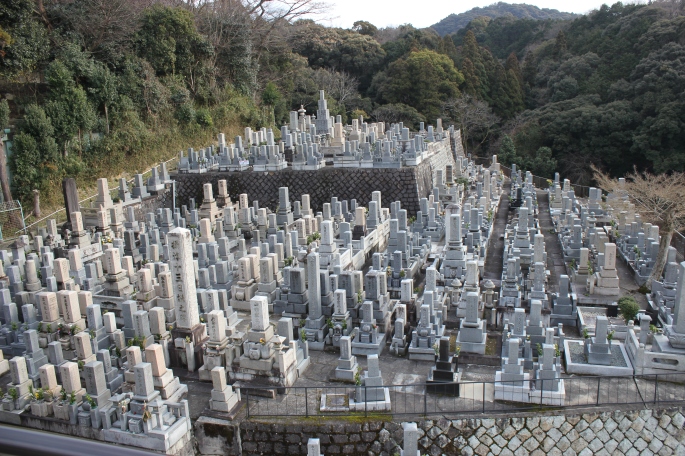