This week on Pylon Radio we peek behind the spooky door of Adrian Rigby and discuss some dark patches of history. That night I went home and edited to the livestream of a volcanic eruption. The resulting video captures this week’s vibe nicely.

Are you optimistic for the future despite overwhelming evidence that humanity is slipping over the edge into an endless void?

Ask your mental health professional if Pylon Radio right for you. 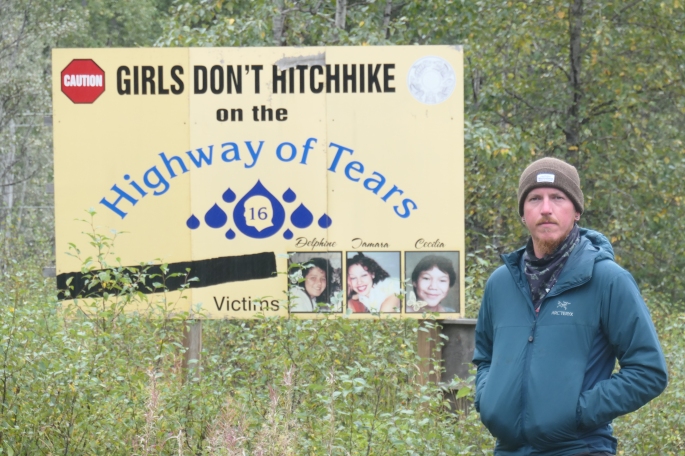 I first met Matthew Jefferson in Montreal, back in 2019. His journey across Canada – a walking distance of 8275 km, started in response to his aunt’s disappearance in 2017, another Indigenous woman taken along British Columbia’s infamous highway of tears. Since then, Matthew @forever_becoming has become an important figure in the fight for justice among missing and murdered Indigenous women, and a speaker whose story I’m honoured to share on the podcast today.

If you enjoyed today’s episode, please like and subscribe to The Elsewhere Podcast wherever you have the power to do so. Reviews, stars and feedback are always appreciated.

Thank you for listening.
https://podcasts.apple.com/us/podcast/the-elsewhere-podcast/id1451553764

What’s this behind me?

Why, it’s the 20th episode of Pylon Radio! Join me with special guest nobody as I speculate on my neighbors painting projects, consider sobriety, and sail across the seven seas to investigate Japanese radio stations.

Hey hey hello, Pylon Radio is BACK for our end of month episode! This time around we discuss the rise of American fascism, Adrian practices his Italian and I tell the story of how I got bitten by street punks in Japan. All this and more while playing an ALL-PUNK SHOWCASE sure to smash the state and impress your parents.

P.S – If you wanted to check out Busking for Berlin, it’s available for free on YouTube. 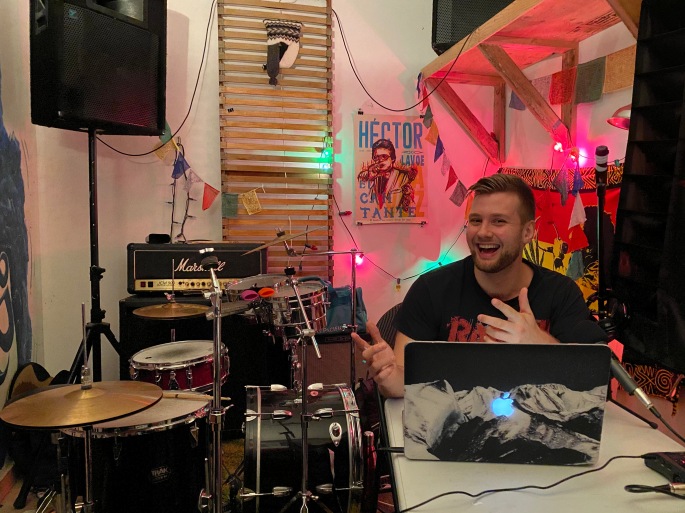 Hey-ho, it’s a brand-new year and the same old fools, discussing the latest news mixed with some funky tunes. Listen in on our virtual fireside chat as we discuss accelerationism, Walt Whitman, and the necromantic power of the internet.

Please note: This article has been sitting in my drafts section for over two years. Upon encouragement from a reader, I’ve decided to finish up the series, both as a means to practice my writing between semesters, and because it’s damn fun reminiscing about a time when we could travel. Narratively, I’ve decided to leave in my original introduction. Perhaps it can illuminate some of the reasons I stopped writing in the first place, and why now (without distractions) I’ve elected to keep going.

Rising from the couch like a drunk friend at the first smell of morning pancakes, my travel log continues. Summer has always been a difficult time for my relationship to focus. Lens-flare makes typing on the beach difficult, and while my friends claim to appreciate my creative side, I have a suspicion that they like getting drunk with me more.

All rejections of personal responsibility aside, lets begin where we left off.

Our day began like any other. Rising at half past nine, I pulled the shutter door of my capsule bed open to discover my friends already awake. This happened often, but was rarely something which we planned for, and no alarms had been set. It’s funny, travelling as a small group, sharing almost every meal together,  after a while you begin to share the same bio-metric clock.

It reminded me of when I grew up, sharing a bedroom with my sister. There’s a closeness that comes with occupying the same space over an extended period of time. Sure, I may have wanted to murder Kia whenever he started snoring (every single night) but I had also been given exclusive rights to wallop him with a pillow whenever that became a problem.

Hangovers absent, we rode the elevator to the main floor for breakfast. I can remember the sun shining deceptively bright through the windows, but it was a cold morning. I held my coffee close, watching the icy snow drift across the intersection below, swallowing the footprints of people hurriedly walking toward the train station.

Planning our final day in Kyoto, it became apparent that Kia would not be joining us. The first of us to fall victim to the weather (one of the joys of backpacking in January), he pulled his blanket over his body and muttered something about meeting us at the Imperial Castle.

Consulting the hallowed Lonely Planet guidebook, Spencer and I settled on a bike ride to Kinkaku-ji (The Golden Temple), across town in Eastern Kyoto. After a long, core temperature raising shower, we packed our bags, and began peddling our frozen gears down the narrow streets, stopping every few blocks to check our GPS.

As we peddled on our way, it became increasingly apparent we were no longer in the “moneyed” side of Kyoto. Smokey butchers and television repair shops lined the streets. Men with in overalls exhaled laboured clouds of condensation as they rode the backs of tiny, eco-friendly garbage trucks, stopping every ten feet to sort through neatly arranged recycling bins. It was an encouraging sign that not all jobs had fallen to automation, but a definite indicator that we had strayed from the polished “tourist zone” of Kyoto’s West End.

Shortly after, we encountered a building which made our hearts stop. Three stories tall, with bright block letters on the side, a movie rental shop called “Video King” appeared across the street. Bizarre I thought, in such a cutting edge country as Japan that there would still be video rental stores.

We drew closer and peered through the windows. White walls and and an empty room. Immaculately clean, but obviously abandoned for at least a year. It appeared my initial instinct had been correct – just like the rest of the world, Japan had long-since moved on from the humble video-store, leaving behind only this commercial-district carcass as an indicator of what once was.

As we walked away, Spencer looked me dead in the eyes,

That song would remain stuck in my head for three long weeks.

Arriving at our destination, we were greeted by trees clipped to loving perfection lining the walkways to the Golden Temple. Large crowds of students on school trips huddled around their teachers, knee-high socks in matching grey skirts knocking against each other uncomfortably in the wind. We kept moving, stopping only to smell the incense and snap a few photos. To be honest, I wasn’t all that impressed with the Golden Temple. Precious minerals have never really interested me, and my encounters with them tend to only remind me of how ridiculous human beings have behaved in the past, enslaving and eradicating each other over access to shiny yellow rocks.

To be clear, that wasn’t the vibe at the temple (everyone was very nice.)

That’s just where my mind goes.

After the Golden Temple we opted to zig-zag our way back through the city back towards the Imperial Castle. On the way we were pulled in by silent beauty of eastern Kyoto’s smaller temples;  they were sparsely-populated, moss-covered, humble in their beauty – the type of place where ordinary people prayed. I remember it striking me as very real. Unlike Hagishiyama, which fit in as part of the tourist maze, these small temples represented the real, practical way Shinto interfaces with people’s lives. A casual visit to a temple before work, the sound of a coin ringing in the bucket, followed the bell, claps and a short prayer.

Coming from secular West Coast Canada, this embedded, practical, yet totally different (from my lived experience) form of religiosity has always stuck with me.

Now, I could bore you with the step by step details that made up my day. Describe the smell of sea-food and the taste of matcha ice-cream that I purchased from every vendor I came across – But that wouldn’t be the real story.

The real story is probably why I’ve neglected to finish this section for so long. It relates to an experience I had inside one of Kyoto’s many temples, an experience which is difficult to put into words. Perhaps it is the fear that my attempt to write about it will either fall short, or worse, ruin the magic of what I felt forever – Regardless, I think it’s important that I try. In many ways, that cold morning in Kyoto is where I turned my life around, and oriented it to the direction I’m still heading in today.

Wandering, almost accidentally, into a temple surrounding a Japanese rock garden (karesansui), me and Spencer both fell into silence. Mutually sensing our desire to take in this experience individually, we quietly separated, gazing into the stone gardens, reading the plaques which described what each section was designed to represent. “The tree in the stone field represents man’s short life juxtaposed with infinity.”

I truly do not know what it was about this place, but it awakened in me a feeling that I’d forgotten, and on some deep level, had been terrified that I would never feel again. Suddenly I was a child, sitting in my parents living room, listening to the radio about far-off places, and people that I’d never met. Being in one of those places, having my curiosity ignited, my baseline religious assumptions challenged – It was the most engaged and alive I’d felt in years. As we rode away on our bicycles, I slowed down, allowing Spencer to ride ahead. Holding on till he reached what my pride determined to be an appropriate distance away, I burst into deep, joyful tears of sudden clarity.

Impact-wise, I can narrow in on that moment as being key in my current understanding of what excites and interests me. Since then, I’ve decided to pursue that curiosity, and selected Anthropology as my university major. Understanding why we are the way we are, the things we share, the things we don’t – is just about as close to a spiritual quest that I’ve ever embarked on.

To some extent, I’ve always felt like a bit of an alien – a visitor to this strange planet, who luckily has gotten pretty good at conversing with its inhabitants.

I don’t really fit in anywhere, but I can kind-of fit in everywhere. The comfort I’ve found in that realization has been the greatest gift life has ever given me.

Alrighty folks, coming at you today with the Pylon Radio HOLIDAY SPECIAL! Tune in while me and Adrian drink mighty homemade Eggnog, discuss the psychedelic origins of Christmas, the likelihood of reality as a simulation, and times we got attacked by birds!

Information for this episode was partially sourced with the following article:
https://moofmag.com/2017/12/12/santa-claus-the-magic-mushroom-the-psychedelic-origins-of-christmas/

December has come! In the spirit of Throwback Thursday enjoy this very merry photo of me up on the hill about 8 years ago. Still riding, still red-eyed – NOW MAKING RADIO!

Alrighty folks, this week on Pylon I’m sharing the airwaves with timelord, drummer and comfortable ninja Mr. Adrian Rigby. We talk about strange encounters in Stanley Park, (not) worshipping the devil, and the positive sides of 2020, all while playing a particularly heavy set, sure to knock the dust off your homebound bones.

Seriously one of the funniest Pylon episodes so far, check it out @ 11am on Vancouver CoOp Radio 100.5 FM, or listen to the full MP3 below.